SEEPAGE from the sewage plant 200m from Broome’s Roebuck Bay shore is threatening among our most fauna-rich and beautiful natural wonders.

WA’s environmental regulator has warned the Water Corporation facility poses “extreme” and “unacceptable” risks to the bay, referred to as the main shorebird site in the national country.

It can be a tourism attraction using its changing colours and “staircase to the moon” visual effect which occurs whenever a rising full moon reflects off the bay’s mud flats.

A new report by the Department of Water and Environmental Regulation blames the Broome South sewage facility for “chronic ecosystem impacts”, including toxic algal blooms in Roebuck Bay, and warns of future injury to the recognised site internationally.

“(The) extreme risks are unacceptable and should be mitigated,” Ruth Dowd, senior manager waste industries, who conducted the chance review, week reported last.

In another report, DWER challenged previous denials by the Water Corporation that it wasn’t to be blamed for polluting the bay.

The department’s principal hydrogeologist Dr Steve Appleyard said a scholarly study commissioned by the Water Corporation in 2015 “ suffered from a genuine amount of limitations that could affect conclusions drawn from the investigations”.

For example, the monitoring bores were insufficient, he noted. 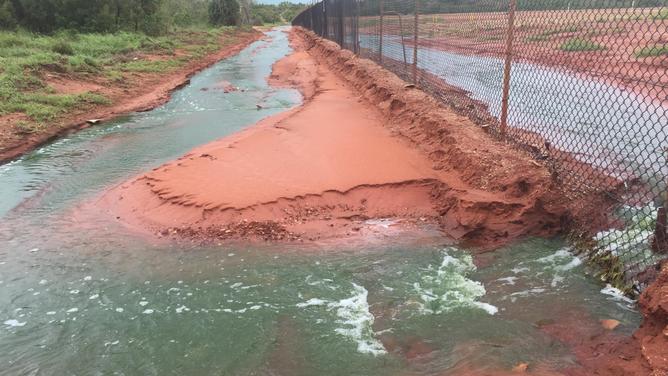 Treated wastewater that is overflowing and entering Roebuck Bay.

Environs Kimberley, which includes campaigned on the presssing issue, said the Broome community have been fobbed off for 15 years nearly.

“The corporation’s been dragged kicking and screaming to the stage where they are able to no more deny they could be having a significant effect on Roebuck Bay and become in charge of the potentially disastrous Lyngbya blooms there,” director Martin Pritchard said. “This report also implies that the Water Corporation can’t be trusted to conduct its studies with DWER pointing out serious flaws in reports supplied by the organization.

“We’re contacting the Minister for Water, Dave Kelly, to do something with this report by conducting an inquiry in to the culture of the Water Corporation in the North West and funding a catchment management plan that could identify methods to reduce the strain on the bay and make certain Lyngbya blooms don’t dominate. We must act before it&rsquo now; s late too.”

After the chance review which took 3 years, the Water Corporation has just been issued with a fresh licence containing a variety of controls to lessen pollution. They include installing low-permeability liners to two of the facility’s ponds.

On Friday, the Water Corporation told The Sunday Times planning was under solution to determine the most likely solution to decommission the sewage plant.

“Altogether, in the last 17 years, Water Corporation has invested nearly $63 million in Broome’s wastewater scheme. This consists of construction of another wastewater treatment plant and work to reline ponds at the Broome South Wastewater Treatment Plant, which includes significantly reduced nutrients in the groundwater under the site reaching Roebuck Bay.

In his report, Dr Appleyard stated Roebuck Bay was becoming “eutrophic”, which threatens its fauna-rich ecosystem.