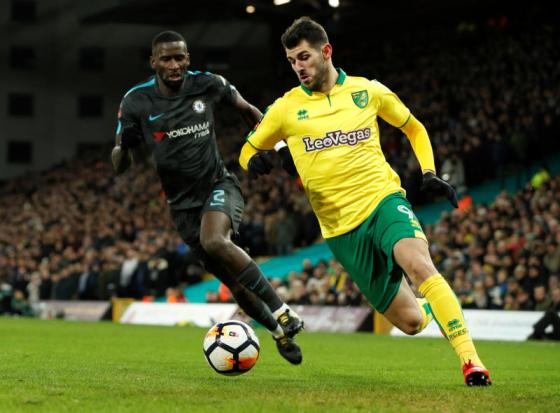 LONDON: Premier League champions Chelsea were held to a goalless draw away to second-tier Norwich City in a dull FA Cup third round tie on Saturday.

Manager Antonio Conte had made nine changes from the 2-2 draw with Arsenal in the league on Wednesday, keeping only Gary Cahill and Tiemoue Bakayoko in the team.

Norwich, relegated to the Championship (second tier) two years ago after one season back in the Premier League, had slightly the better of a quiet first half.

Manchester City kept alive their chances of winning four trophies this season, coming back from a goal down to beat Burnley 4-1 in the FA Cup third round on Saturday with two goals from Sergio Aguero.

The runaway Premier League leaders, who are also in the last-16 of the Champions League and semi-finals of the English League Cup, fielded a strong side but struggled initially to impose their will on Sean Dyche’s side.

Ashley Barnes fired Burnley ahead in the 25th minute, taking advantage of a mis-kick from John Stones, but then two goals inside two minutes from Aguero, early in the second half, put Pep Guardiola’s side in control.

Goals from Leroy Sane (71) and Bernardo Silva (82) made sure of the victory as City cruised into the fourth round.