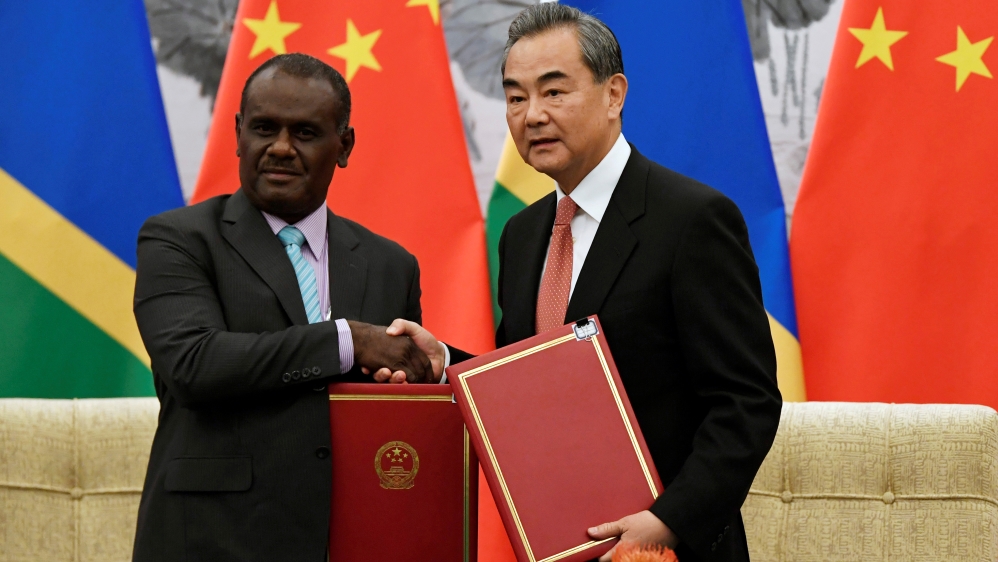 China and the Solomon Islands have established diplomatic relations days after the Pacific island nation severed ties with Taiwan.

China’s Foreign Minister Wang Yi and the Solomon Islands’ Minister of Foreign Affairs Jeremiah Manele signed an agreement to form ties at a government guest house in the Chinese capital, Beijing, on Saturday.

“We look forward to the quick development of bilateral relations between China and the Solomons,” said Wang, pledging to support the country in moving “forward in the development path it has chosen for itself”.

Manele said the Solomon Islands’ decision to switch diplomatic recognition from Taiwan to China – its largest trading partner – was based on “national needs”.

“The development challenges for our country are huge. We need a broader partnership with countries that also includes China,” he said.

The move marks a setback for Taiwan, which has been a de facto sovereign nation since the end of a civil war in 1949. China still views the island as its territory and has promised to seize it – by force if necessary.

Kiribati, another Pacific island nation announced it has switched diplomatic recognition to China on Friday

“Right now there are only very few countries that have not established diplomatic relations with China,” Wang told reporters.

“We believe that in those countries there will be more and more people with vision who will step forward and their voice for justice and in line with the trend of history will be heard.”

The Solomon Islands and Kiribati’s respective decisions to break with Taipei have dealt fresh blows to Taiwan President Tsai Ing-wen, who is seeking re-election in January. The move takes to seven the tally of allies lost to China since Tsai took office in 2016.

Since her election, China has stepped up pressure on Taiwan by flying regular bomber patrols around the island. China suspects Tsai of pushing for Taiwan’s formal independence, a red line for Beijing.

Taipei has meanwhile accused Beijing of using “dollar diplomacy” to buy off its few remaining allies.

China routinely denies offering easy cash and loans in return for recognition but said this week that both Kiribati and the Solomon Islands would have “unprecedented development opportunities” with China by their side.

Winning over the Solomon Islands and Kiribati also strengthens China’s influence in the Pacific, where the United States and Australia have grown increasingly worried about Beijing’s increasing clout.