'Good company': Tennis bad boy Nick Kyrgios reveals pic of Eugenie Bouchard in his VIP box – before getting close to her SISTER 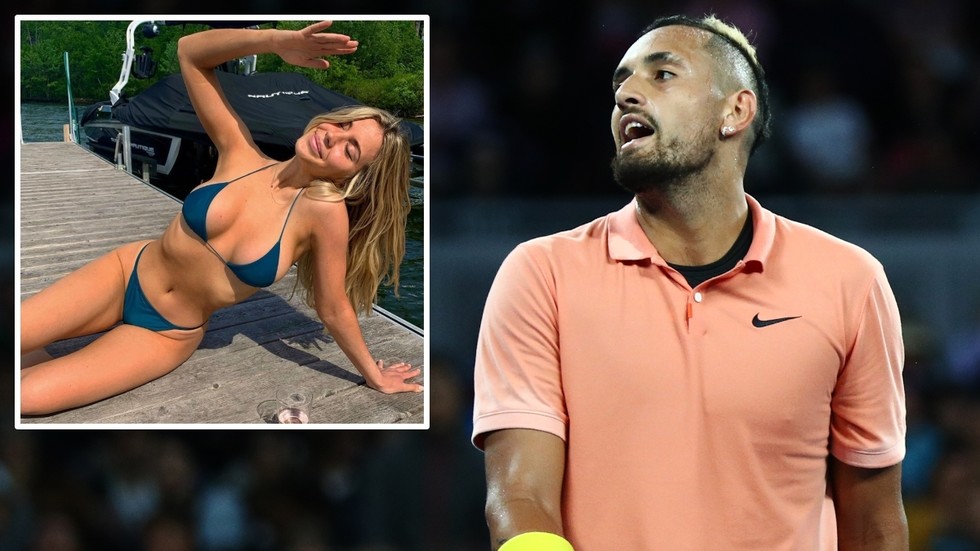 Nick Kyrgios, who recently broke up with Russian tennis player Anna Kalinskaya, has called love-seeking ace Eugenie Bouchard “swaggy as f***” in a photo from his box at Wimbledon taken before he was pictured with her twin sister.

Kalinskaya was forced to deny that a series of strongly-worded posts, writing “you’re not a bad boy, you’re simply a bad person” and making reference to an unnamed “f***ing energy vampire”, were about Kyrgios following their split last month.

The fun-loving Australian now appears to have turned his attentions to the Bouchard twins after picturing them sitting behind his father in his box at the All England Club last summer, when the presence of the pair among his inner sanctum sparked rumours that romance was involved.

Former world No. 5 Bouchard, who recently went on a date with a comedian after auctioning the opportunity for dinner with her, defended Kyrgios when he courted controversy for serving underhand against bitter rival Rafael Nadal during the match.

But her twin sister, Beatrice, seemed to have taken her loyalty a step further when she posed with Kyrgios in Montreal in August.

The Canadian glamour model, who was mistaken for Eugenie in photos accompanying some reports of the tennis star’s requirements in a partner last month, posted a picture of Kyrgios with his arm around her, adding: “Good company.”

Her twin was once Kyrgios’s mixed doubles partner and was at the center of a row during one of his typically tempestuous displays at the US Open in 2018.

In a second-round match during which the umpire had to tell Kyrgios to make an effort in order to avoid punishment, the temperamental star, whose match took place before Bouchard’s, was told by a spectator: “Just leave, we want Genie.”

He replied: “Well, you’ll never have her.”

Kyrgios is a fan of partying in Montreal and even had a heavy night out in the city before one of his routinely provocative attempts to beat icon Nadal ended in victory.

“We went out, we had a great time,” Kyrgios told friend and podcast host Elliot Loney about their night on the town.

“A day-and-a-half later, I saw the draw and I’m like, ‘I’ve got to play Rafa.’ Nothing changes, you know.

“I have already told you what I think of these players; I don’t give them respect just because of who they are, what they’ve achieved.

Loney claimed Kyrgios had been “off his nut” less than 24 hours before beating the Spanish great. “I was a full-blown fetus, a corpse,” he said of his own state of disrepair.

“I turn on the TV, and there you were on the TV dusting up Rafael Nadal on a hard-court. I could not believe it. I said, ‘I cannot believe Nick is doing this.'”

Also on rt.com ‘There’s so much negativity out there’: Tennis ace Eugenie Bouchard discusses romance and ‘haters’ on promising $4,000 first date