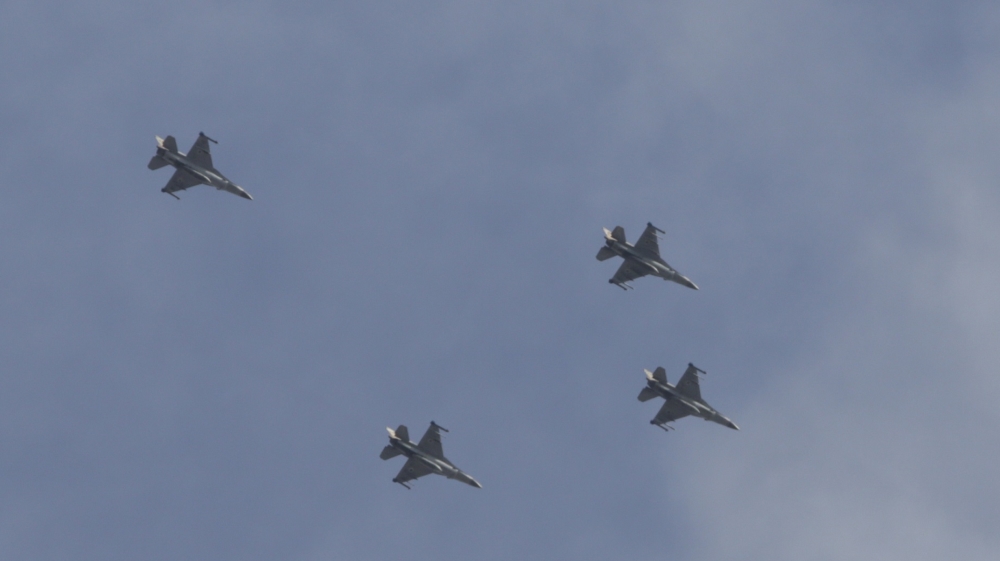 A Palestinian security source said there were no casualties in the latest Israeli air strike [File: Sebastian Scheiner/AP]

Israeli warplanes hit the Gaza Strip’s ruling Hamas movement’s positions early on Monday in response to earlier rocket fire from the territory into Israel, the army said in a statement.

Israeli authorities also announced a punitive reduction in the flow of fuel to the strip’s main power station, meaning a deep cut in the already rationed electricity supply.

Three rockets were fired from Gaza into southern Israel on Sunday night, the Israeli army said.

“Three launches were identified from the Gaza Strip into Israeli territory,” it said in a statement. “Two of them were intercepted by the Iron Dome aerial defence system.”

“In response, a short while ago, (Israeli air force) fighter jets struck a number of terror targets in a Hamas military compound in the northern Gaza Strip, including the office of a Hamas battalion commander,” a statement on Monday morning added.

A Palestinian security source told AFP news agency that there were no casualties.

“The prime minister and minister of defence, Benjamin Netanyahu, ordered to downsize the transfer of fuel through the Kerem Shalom (border) crossing to the power station in Gaza by half, effective this morning and until further notice,” it said in English.

Netanyahu is fighting for reelection in a potentially tough general election on September 17 with critics from his right-wing power base calling for tougher action against the Islamist Hamas.

Nevertheless, analysts say, he is anxious to avoid escalation ahead of the polls.

Gaza is ruled by Hamas, which has fought three wars with Israel over the past decade.

Since the start of August, an uptick in rocket fire and Palestinian attempts to cross from Gaza into Israel have been met with Israeli strikes, threatening a fragile ceasefire between Israel and Hamas.

Earlier this month,  the Israeli army killed four Palestinians near the boundary area.

Since March 2018, Palestinians have staged weekly protests along the line dividing Gaza and Israel since to rally  against the Gaza Strip’s dire conditions resulting from 12 years of the Israeli-Egyptian blockade.

Over 300 Palestinians have been killed by Israeli fire in Gaza or the boundary area since then, the majority during demonstrations. Seven Israelis have also been killed.

Fuel deliveries, which are coordinated with the United Nations and paid for by Gulf state Qatar, were part of the truce agreement.

They have improved electricity supply in the enclave, where until the latest cut residents were getting around 12 hours of power a day, according to the UN.

In the past, the daily power supply was regularly as low as six hours.