Mexico City – Alejandra Castillo and her husband had been living in their brand-new, Mexico City apartment for only six months when a 7.1-magnitude earthquake shattered their entire building block to the ground two years ago, taking their apartment down with it. Two women died under the collapsed buildings.

“I remember everyone was screaming, and we were all trying to reach the safety zones,” Castillo said last year as she recalled the 2017 quake.

“I couldn’t make it because of the intensity of the ground’s movements, so a colleague dragged me. I cried ‘dear God!’ and we both said our prayers,” she added.

With an aftermath of nearly 230 people killed and over 5,000 buildings damaged in Mexico City alone, international aid flew in, the government allocated emergency funds, and a month later there was a nearly $800m reconstruction fund available to help survivors like Castillo.

Yet today, Castillo is still a tenant after spending her life savings on the apartment she lost to the earthquake. The only help she says she’s received is the monthly stipend of about $200 the government gives people who lost their homes that day, which only covers half of her rent.

“At least with the new administration things are more efficient,” Castillo told Al Jazeera. “We now receive the money through electronic deposit, instead of having to go queue every month for hours at an office.”

In December 2018, there were changes in Mexico’s federal and state administrations, with Andres Manuel Lopez Obrador taking office as the country’s president and Claudia Sheinbaum as Mexico City’s mayor. New commissions were set up to deal with the earthquake’s aftermath.

“I think the new administration [in Mexico City] has done more in nine months than the previous one did in 15,” Castillo said.

While Miguel Angel Mancera and interim Jose Ramon Amieva were mayors, reconstruction committee members resigned their positions alleging government corruption and non-governmental groups denounced that more 95 per cent of the $797m reconstruction fund was unaccounted for.

Merino leads Nosotrxs, the NGO that reported the reconstruction fund’s unaccountability in 2018 and issued transparency and future disaster planning guidelines. He was also one of the reconstruction committee members that resigned during the previous administration.

“I do believe this issue [accountability] has been solved, and it has been done well,” Merino told Al Jazeera. “However demolition is still a concern, the process is still ongoing and there are still many buildings that are fragile and can collapse at any moment.”

When Al Jazeera visited Arcadio Resendiz a year after the earthquake, the 50-year-old and his family were confused about how to navigate the bureaucracy needed to rebuild their entire roof.

Part of Resendiz’s roof had collapsed during the quake, and Civil Protection had deemed the entire complex where his home stands unsafe, ordering it to be demolished.

“Everything is still the same as last year,” Resendiz told Al Jazeera this week.

“There’s still no roof and the rain still pours inside my granddaughters’ room. Since it was leaking through the wall into the dining room next door, I finally decided to clump together the rubble to stop the leaking.”

Resendiz, a retired car mechanic and former police officer, wasn’t sure whether removing the rubble would prevent him from receiving reconstruction aid [Courtesy of Arcadio Resendiz]

Resendiz, a retired car mechanic and former police officer, wasn’t sure whether removing the rubble would prevent him from receiving reconstruction aid “because you never know”.

“But now the local authorities have assigned us a designated person to help us navigate the system, and he’s been incredibly helpful. We have his mobile number and he’s always available to help us with all the paperwork,” Resendiz said.

Waiting for reconstruction over the past two years “has been beyond frustrating,” he added. “It’s like being lost in the middle of the ocean and kicking around never to reach the shore.” 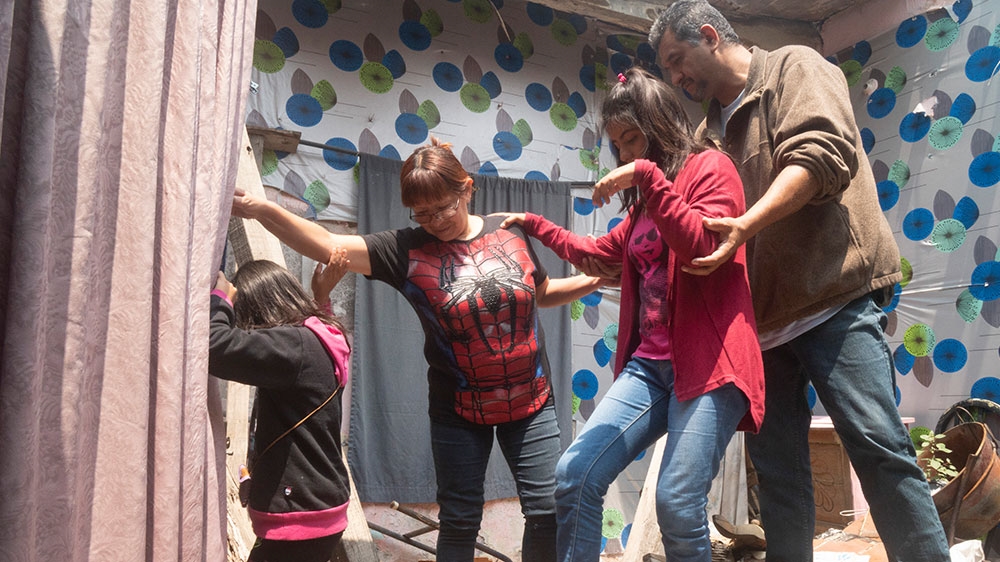 Cesar Cravioto, Mexico City’s Reconstruction Commissioner, told Al Jazeera he expects all buildings that need to be demolished will be brought down by the end of this year, and that all single house complexes like Resendiz’s will be rebuilt by the end of 2020.

According to the Reconstruction’s Consultant Committee’s report issued three weeks ago, all of the 16,907 households they identified as affected by the earthquake will receive reconstruction aid.

“To be clear, there will be no budgetary limit for reconstruction,” Lopez Obrador told reporters during his morning news conference on Wednesday.

However, help is moving slowly. So far less than 38 percent of the damaged homes have an ongoing administrative process for receiving this help, according to the committee’s report.

“I do think there’s been significant progress in how the current administration is dealing with reconstruction,” said Rebeca Moreno, member of Ciudadania 19S, a watchdog collective of NGOs advocating for reconstruction transparency after the quake.

“But it’s a desolate landscape when it comes to legal consequences for those responsible for building faulty constructions,” she told Al Jazeera.

So far only one out of the 100 cases that are currently under criminal investigation has moved to trial, according to Ciudadania 19S.

“There’s a clear obstruction of justice going on,” Moreno added.

Castillo – the then-newlywed who lost her entire apartment to the quake – and her neighbours paid for private forensic analysis that determined their building collapsed because it did not comply with construction regulations, and pressed charges against the construction company.

Since two people were killed under the collapsed building, the responsible construction director was arrested a month after the incident, but was set free 103 days after when a judge granted his appeal. Neither him nor anyone from the construction company has faced trial.

Meanwhile, “no one has done anything” at the site at the site where Castillo’s apartment once stood.

Even though she says she’s hopeful that the new administration seems to be making progress, “we’re not exactly relieved. We’ll be relieved when we see our apartment is built back,” Castillo says.