‘Racism is over now, thanks!’ Madonna trashed for tweeting son’s ‘TRIBUTE DANCE’ to George Floyd amid Minnesota chaos 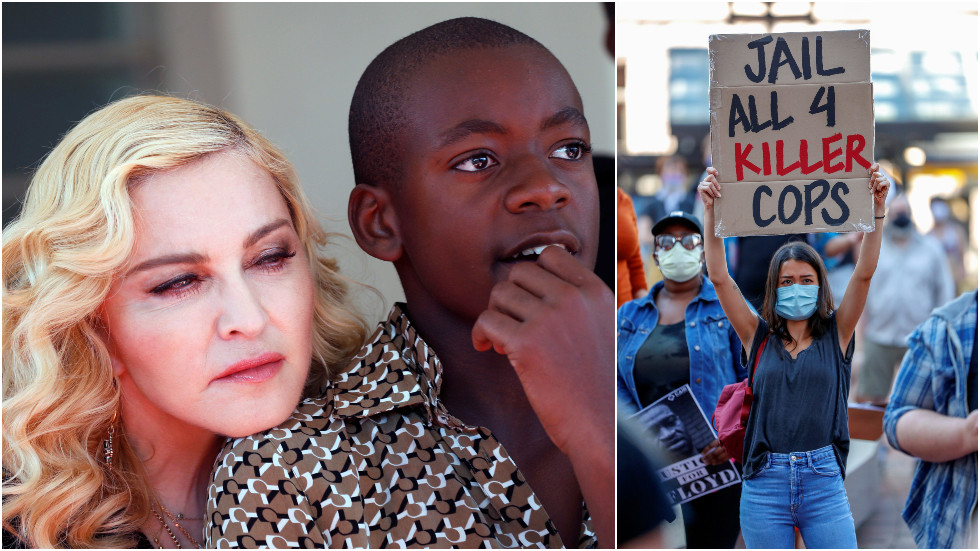 Netizens have savaged a bizarre video shared by pop star Madonna, showing her son perform a lively dance routine to stomp out racism in “tribute” to George Floyd – with many asking what this virtue signalling accomplished.

As Minnesota’s Twin Cities erupt into chaos on Thursday night, seeing widespread looting, arson and vandalism, the Queen of Pop made her own contribution to show solidarity with Floyd’s family and those protesting his death – with an interpretive dance routine by her son, David, set to Michael Jackson’s ‘They Don’t Care About Us.’

“My son David dances to honor and pay tribute to George and his family and all acts of racism and discrimination that happen on a daily basis in America,” she said in an awkwardly-worded tweet.

While some were impressed with David’s moves – apparently filmed in the middle of his kitchen – a wave of critics saw the clip as highly inappropriate and tone deaf, slamming Madonna for pointless virtue signalling in the wake of a tragedy.

“Thank goodness for dance. I thought racism and police brutality would never end….. and all we needed to do was cut rug,” one netizen joked.

Thank you so much. I’m so glad he was able to stomp out racism with this deeply moving tribute. Y’all’s hard work and sacrifice to the cause…how can we ever repay you?

“This is trash, and deeply disrespectful,” another critic said. “If you want to actually do something to help combat racism and oppression, donate to the Minnesota Freedom Fund to help pay the bail of protesters in Minneapolis.”

A handful of netizens also lined up to defend the singer, however, suggesting Twitter is lousy with “miserable people” unable to appreciate the thought behind a “symbolic gesture.”

A lot of replies from obvious miserable and unhappy people just looking for anything to criticize. Put in the decades of work Madonna has done for charity and activism then get back to me with your critiques.

I think it’s a symbolic gesture and she knows that.

Though Minnesota Governor Tim Walz activated National Guard units earlier on Thursday to quell the unrest in Minneapolis and St. Paul, it appears none have yet been deployed on the ground, as police struggle to contain the rioting.