Scientists create embryos in bid to save northern white rhinos 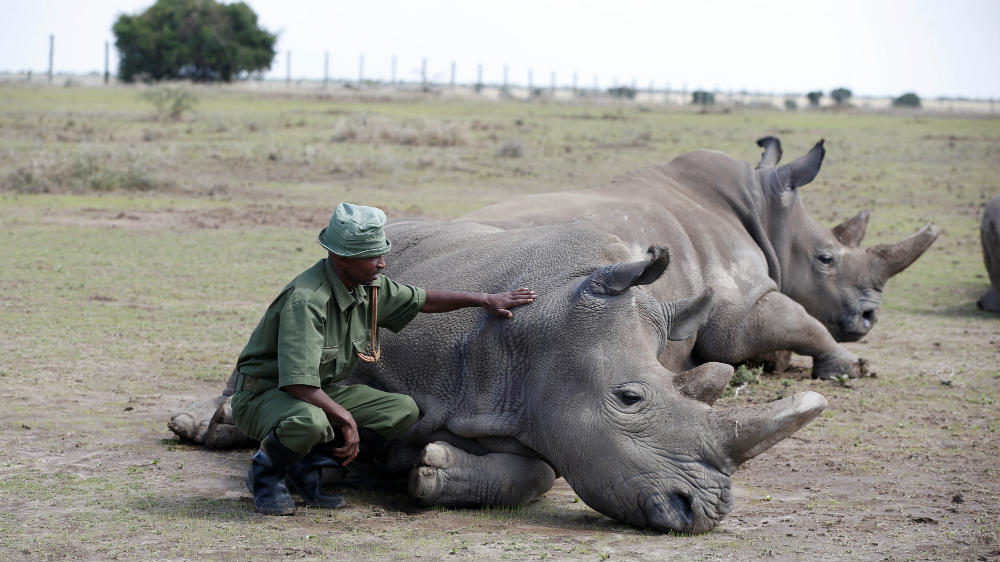 The last two northern white rhinos – Najin, front, and her daughter Patu – are watched over at all times by armed guards [Baz Ratner/Reuters]

Conservationists have successfully created two northern white rhino embryos in a key step towards pulling the species back from the brink of extinction, scientists in Italy said on Wednesday.

Only two survivors are left in the world and both are female and unable to carry calves. The last male, named Sudan, died at the Ol Pejeta Conservancy in Kenya last year, making scientists the majestic animals’ last chance.

Using eggs harvested from the females and frozen sperm from deceased males, a team in Cremona, Italy was able to create two viable embryos, according to the BioRescue international consortium of scientists.

Najin, 30, and daughter Fatu, 19, are the last of the subspecies of white rhino, and live under 24-hour armed guard.

Fatu has degenerative lesions in her uterus and Najin has weak hind legs that could cause complications if she became pregnant.

In August, they underwent a highly risky procedure carried out by a team of international vets, which saw them anaesthetised for almost two hours, and their eggs extracted using techniques that have taken years of research and development.

At the Italian biotech laboratory Avantea, those eggs were then fertilised with sperm from males Suni and Saut – though only two of Fatu’s eggs developed into viable embryos.

They have now been stored in liquid nitrogen to be transferred into a surrogate mother in the near future.

“Five years ago, it seemed like the production of a northern white rhino embryo was an almost unachievable goal – and today we have them,” said Jan Stejskal, communications director at the Dvur Kralove Zoo, where Najin and Fatu were born.

The coming months will be dedicated to optimising a technique to transfer the embryos into a surrogate rhino, he said.

Richard Vigne, managing director of Ol Pejeta, hailed the “major step forward” but warned that “we have a very long way to go”.

“Global human behaviour still needs to radically change if the lessons of the northern white rhinos are to be learned,” he said.

There are five rhino species remaining on the Earth, of which black and white rhinos are found in Africa. The northern white rhino is generally considered a subspecies of white rhino, although some scientists believe it to be a sixth species.

Rhinos have few predators in the wild because of their size but have been devastated by poaching for their horns – used in traditional Chinese medicine.

Modern rhinos have plodded the Earth for 26 million years. As recently as the mid-19th century, there were more than one million in Africa. The western black rhino was declared extinct in 2011.

It is hoped a revived population – which could take up to 70 years – could eventually be reintroduced into secure habitats in these areas.