Ten and only 10 Democratic 2020 US presidential hopefuls will face-off on Thursday night in the third presidential debate of this election season.

Unlike the previous two debates, the event will only take place on one night and will host just 10 of the 20 Democratic contenders still in the race. The first two debate saw 20 candidates take the stage over the course of two nights.

It will be the first time all the top-polling candidates face each other on the same stage.

“This is a significant debate because it’s the first debate of the fall after Labor Day,” said Joel Rubin, a former deputy assistant secretary of state who served under former President Barack Obama.

“Typically, this is the time period when we view the race for the nomination as really beginning to take solid form where people are beginning to pay attention and make assessments,” Rubin, who also made a run for a congressional seat in the Maryland Democratic primary in 2018, told Al Jazeera.

Healthcare, immigration and the economy, among other issues, will be discussed.

As 10 presidential hopefuls gear up for another night of debate, here’s what you should know:

1. When and where will the third debate take place?

The event will be hosted by ABC News in partnership with Univision.

2. Which candidates will be on stage? Why are some not?

The Democratic National Committee (DNC) implemented stricter guidelines for the September debate, requiring candidates to have polled at least two percent in four DNC-approved polls between June 28 and August 28 and obtained at least 130,000 unique donors, with at least 400 unique donors per state in at least 20 states.

Those requirements are significantly stricter than the first two debates in which candidates made the stage if they were polling at one percent in more than three separate DNC-approved polls or have at least 65,000 unique donors.

Only 10 candidates met the new threshold:

3. Which candidates won’t be on stage?

The stricter guidelines mean 10 candidates did not make the stage.

4. How will the debate work?

5. What issues will likely be front and centre?

Thursday’s debate comes in the wake of multiple mass shootings, including one in El Paso, Texas, in which 22 people were killed. Democrats in Congress and on the campaign trail have since renewed their calls for stricter gun control measures.

O’Rourke, who is from El Paso, and Booker have been particularly vocal on the campaign trail about gun control.

Many candidates support universal background checks and a ban on assault rifles.

Healthcare has been a major topic throughout the early campaign season, pinning the more progressive politicians against those touting more centrist platforms.

While the complexities of their proposals vary, expect candidates to highlight the need to move to a Medicare-for-all system or continue with an updated version of the Affordable Care Act (also known as Obamacare). 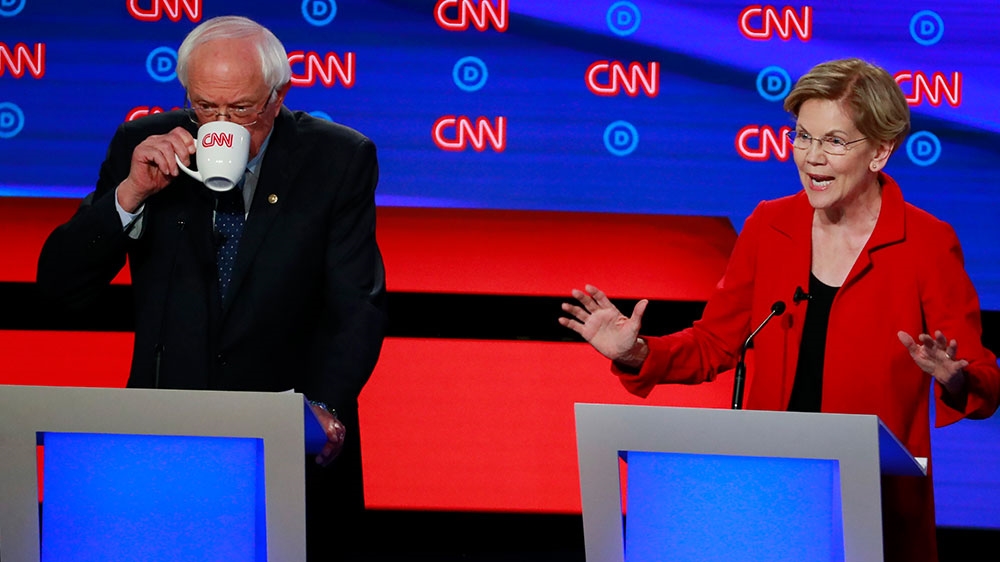 It will be the first time the two major progressives – Sanders and Warren – who support Medicare-for-all, will be on stage together against Biden, who wants to keep the most popular components of the Affordable Care Act while adding a public option.

It should be noted that although Warren has endorsed Sanders’s Medicare-for-all plan, she has yet to release her own detailed healthcare proposal.

All the Democratic candidates have said they will immediately rejoin Paris Climate Accords, which Trump announced he was withdrawing from upon taking office.

Most candidates have at the very least embraced the Green New Deal, a congressional resolution aimed at achieving net-zero US greenhouse gas emissions “through a fair and just transition for all communities and workers”. Senators Sanders, Harris, Warren, Booker, and Klobuchar are co-sponsors of the resolution.

Immigration has brought out some of the more heated exchanges during the last two debates, and don’t expect anything different on Thursday night.

There have been divisions over the decriminalisation of irregular border crossings, with many wanting to make it a civil offence and others advocating for a tougher stance. 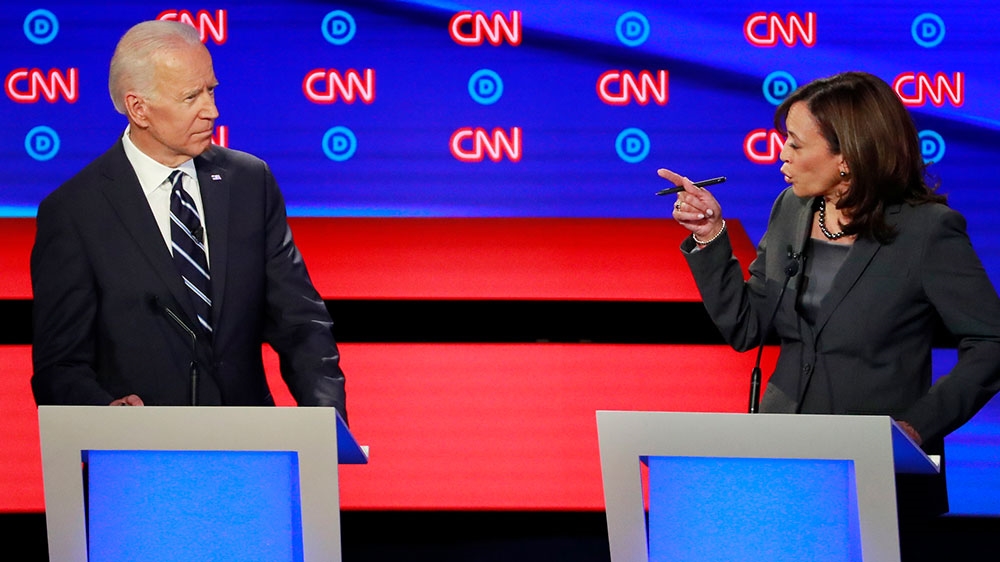 Although all the candidates regularly go after Trump’s anti-immigrant rhetoric, Biden has been forced to defend former President Barack Obama’s immigration policies.

Although foreign policy is usually not a major issue during presidential campaigns, Thursday’s debate comes less than a week after Trump called off peace talks with the Taliban, declaring the negotiations “dead”. Expect candidates to weigh in on Trump’s initial decision to host talks with Taliban and Afghan leaders in the US, and his abrupt decision to call those meetings off at the last minute.

“There is no simple messaging on Afghanistan,” Rubin, the former deputy assistant secretary of state under Obama, said. He added that Democrats will likely criticise Trump for wanting to meet the Taliban during the week of the anniversary of the September 11, 2001, attacks, but also criticise Trump for not meeting with the Taliban.

“Democrats are going to both nod to the progressive base about getting out of endless wars, but also nod to the pragmatic use of diplomacy to do it in a smart way,” Rubin said. “So, you’re going to see a lot of overlapping arguments among the candidates. What will be unique is to see how individual candidates frame their personal experience and knowledge as giving the leg up in being commander in chief on ending peacefully what has become America’s longest-ever war.”

The debate will also take place on the heels of Trump’s decision to force out his national security adviser, John Bolton.

Bolton and Trump clashed on a number of issues, including Iran, which has been a topic of discussion at past Democratic debates.

6. Will Trump be watching?

Trump has weighed in on the previous debates and is expected to be keeping his eye on this one as well.

Previously, he has called the candidates “boring”, and criticised the news organisations hosting them.

7. When is the next debate?

The next debate will take place on October 15 and possibly October 16, depending on the number of candidates that qualified.

So far, 11 candidates have met the threshold. Billionaire Tom Steyer, who failed to make the stage for Thursday’s debate, has secured a spot for the October event.

The fourth debate will take place in Ohio, but the city has yet to be announced.