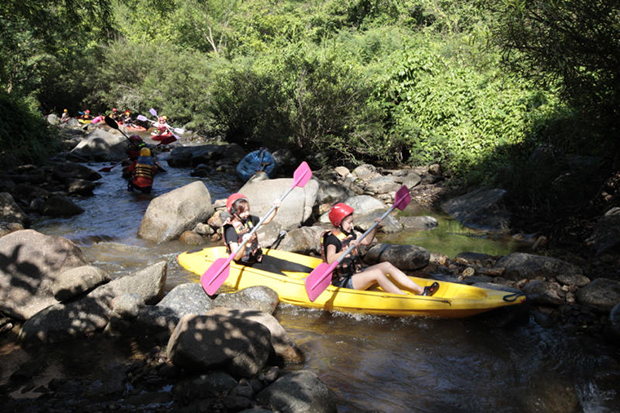 Suan Phung, a district in Ratchaburi province, is in the spotlight as a new destination for sporting tourism.

Pirun Chinachot, head of the Tourism Council of Thailand’s Ratchaburi office and president of the Suan Phung Tourism Business Association, said 10 kilometres of bicycle lanes are being built at a cost of 35 million baht and are set to open in November.

Mr Pirun said the number of sporting events in Suan Phung has increased by 20% this year, with most occurring in the high season.

The Singha Obstacle Trail Series, the Suan Phueng Moon Run and the Season of Love Song are among events taking place in the remaining months of the year. The music event alone is expected to draw 40,000 visitors, Mr Pirun said.

Suan Phung welcomed about 500,000 tourists in the first six months and will surpass 1.3 million for the entire year on the strength of these events, he said.

The district, about 150km west of Bangkok, is one most popular destinations in Ratchaburi, a province that received about 2 million visitors in 2018.

Chatchai Chaipimol, chief of the Ratchaburi governor’s office, said the district has plentiful mountains and forests and enjoys a cool climate, leading the area to be dubbed the Switzerland of western Thailand.

He said the transport system is improving and a Nakhon Pathom-Hua Hin dual track train line is under construction with a stop in Ratchaburi.

Visitors will be able to get to the province faster and more conveniently once the high-speed train and various motorway projects are completed.

According to the Tourism and Sports Ministry, Ratchaburi welcomed 1.36 million tourists in the first seven months of this year, up 3.5% year-on-year, generating 2.49 billion baht in revenue, up 6.5%.

The province will team up with the Tourism Authority of Thailand to arrange a 500-woman cycling event at Suan Phung on Sept 28 and 29 to encourage cyclists nationwide to visit the province.