Traveling to Europe will now become a little more complicated for US citizens – starting from 2021, they will need to obtain an entry permit before crossing the pond. The measure comes as new cracks appear in US-EU ties.

In less than two years, US travelers will be required to apply for visas before entering Europe. “This means that from 2021, all Americans traveling to a European Schengen-zone country will be in need of an ETIAS,” an EU press release said, referring to the European Travel Information and Authorization System. 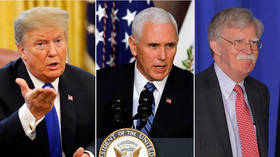 Under the new scheme, Americans will have to fill in an online form and pay a fee. The system will allow EU authorities to pre-screen US citizens crossing the Atlantic. Once granted, the visa will last for three years, allowing Americans to make multiple trips to Europe.

The EU says that going through ETIAS will be cheap, costing a fee of €7 (roughly $8); officials also promise that 95 percent of applicants will be granted approval within minutes. Who will make up the remaining 5 percent is unclear, but rejected citizens will be able to appeal the decision.

While looking onerous, the new system is still easier than procedures for obtaining regular visas. The application, for instance, will not require a personal interview or extensive background checks.

For the time being, Americans visiting Europe for less than 90 days enjoy visa-free travels to the border-free Schengen area. And vice versa, EU travelers – except those coming from Cyprus, Poland, Croatia, Bulgaria, and Romania – have to get pre-clearance enrolling in the US Electronic System for Travel Authorization (ESTA).

The EU says the new requirements will help shield the continent from modern challenges. “Similar to other countries and regions in the world, Europe has recently decided to improve their security level to avoid any further problems with illegal migration and terrorism,” reads the ETIAS page.

But beyond that, there could be another rationale behind the measure as the relations between Washington and Brussels are far from perfect. The US and European countries have recently clashed over a range of issues including trade, the Iran deal, and energy cooperation with Russia.