What lies beneath: ‘Lost’ Picasso revealed 100 years after artist hid it (PHOTOS) 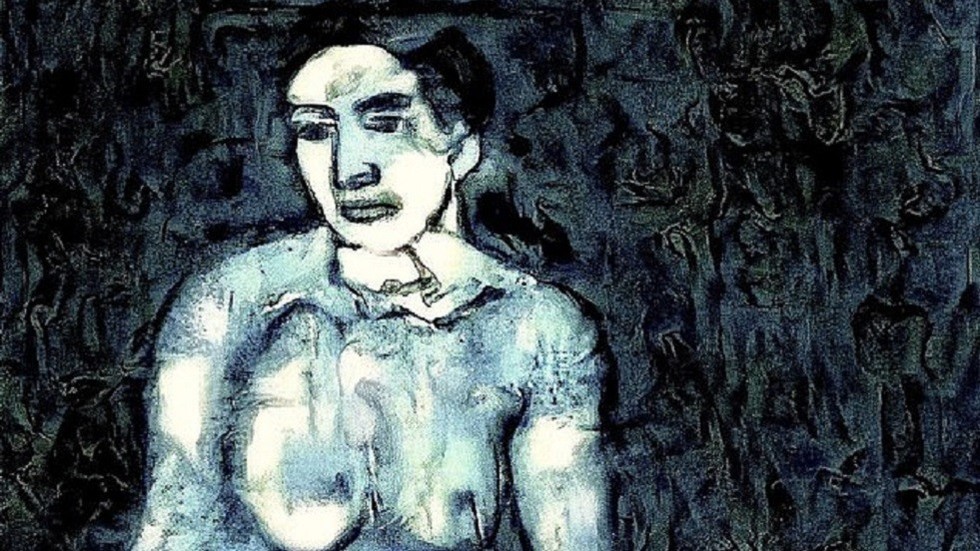 New imaging technology has carefully reconstructed a never-before-seen Picasso painting that the artist covered beneath one of his most famous pieces more than 100 years ago.

One of Pablo Picasso’s best-known pieces from his ‘Blue Period’ – when he painted almost exclusively in shades of blue – called ‘The Old Guitarist’ features an elderly man slumped over the stringed instrument, dating back to 1903.

However, the faint impression of a ghostly woman in the background of the painting has long been noted by art historians. In 1998, art experts photographed the artwork using x-rays and infrared light to see what might be hidden beneath its surface.

And the results didn’t disappoint: they discovered the faint outline of a completely different artwork – a seated woman holding out her left arm. Picasso had painted over the piece, but experts were able to match this original, concealed painting to a similar sketch he had sent in a letter at the time.

Now, researchers in London drew on an updated technique to decipher the finer details of the earlier artwork to uncover the lost piece in all its former glory.

The machine vision technique, called ‘neural style transfer’, can distinguish paintings by different artists before then reproducing an image according to their distinct style.

“We present a novel method of reconstructing lost artwork, by applying neural style transfer to x-radiographs of artwork with secondary interior artwork beneath a primary exterior, so as to reconstruct lost artwork,” Anthony Bourached and George Cann explain in their study ‘Raiders of the Lost Art’.

While there’s no way of knowing the exact way the artwork was originally painted, the end result is a full-color version of the painting in the same style Picasso was using when he first painted it.