'You're selling sex not MMA': UFC star lashes out at fellow fighter Loureda over 'striptease' videos 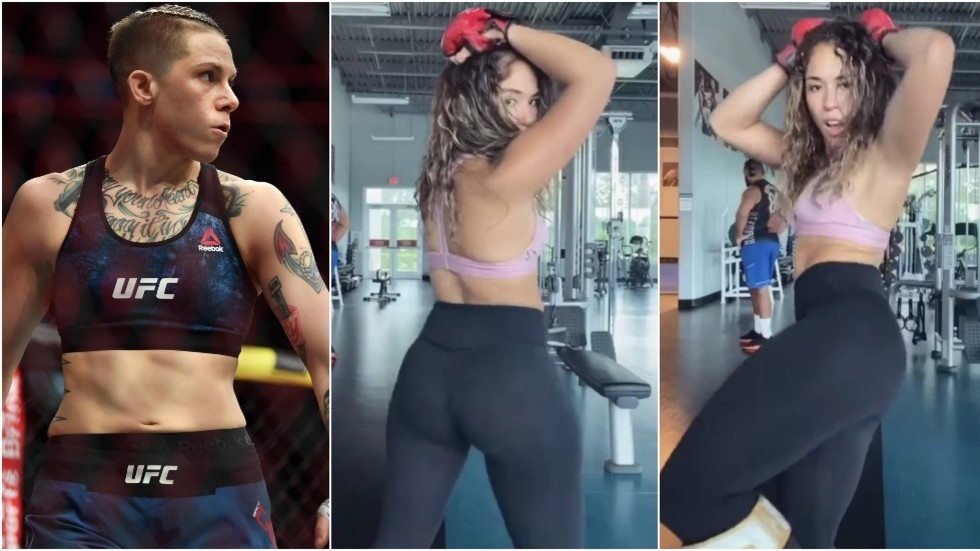 UFC bantamweight Macy Chiasson has accused fellow fighter Valerie Loureda of “selling sex not MMA,” as the pair clashed over ideas of “femininity” after Loureda posted a racy dance clip on her social media accounts.

Bellator flyweight Loureda, 21, has picked up two wins from her two pro career bouts to date, but boasts a growing online following that defies her fledgling status as a fighter.

That stems in no small part from the steady stream of scantily-clad images and TikTok dance clips which the Florida fighter shares with her more than 230,000 Instagram followers.

It was the latest of those posted this week – which features Loureda at training, dancing in front of the camera – which sparked an angry response from UFC star Chiasson.

Sharing the clip on Twitter, the US fighter wrote: “Lol I f*cking can’t anymore.

“Is this the message we want to continue to convey to not only our future leaders but to the disgusting already misogynistic dudes out here.

“Are we here to fight and be role models or are we here for male followers and strip teases. #bringwmmaback”

Lol I fucking can’t anymore.Is this the message we want to continue to convey to not only our future leaders but to the disgusting already misogynistic dudes out here. Are we here to fight and be role models or are we here for male followers and strip teases.#bringwmmabackhttps://t.co/vzPMYtZllI

That triggered a back-and-forth with Loureda, who accused the 28-year-old Chiasson of “contradicting herself” over her message of female empowerment.

Girl by putting other women down you’re contracting yourself. Who said I do anything for my male followers ? I have been fighting since I was 2 years old and just like you have other interests like tattoos I like to dance. Lmao simple

But Chiasson – who stands 6-1 in her pro career (including 4-1 in the UFC) – stood firm, claiming that Loureda was “portraying the wrong message to people who watch this sport.”

Loureda then returned fire with the message that “you can be strong feminine and sexy and still be a bad b*tch in a male dominated industry.”

Nah it shows you can be strong feminine and sexy and still be a bad bitch in a male dominated industry. #facts

Chiasson questioned that logic though, claiming that Loureda was “selling sex not MMA.”

But……are you tho? Some of us actually care about the quality of womens mma and women’s sports in general. You’re selling sex not mma.

The lengthy spat continued with the pair clashing over interpretations of “femininity.”

I’m selling sex because I was born with a different body than you and im Hispanic ? LOL I fight in a cage just like you do, when I’m not in a cage I’m extremely feminine and I was born like that. Stop hating lol

Yes. You fight in a cage but not like I do and don’t talk to me like I don’t know what femininity means.

The exchange did, however, end on a more conciliatory note as both fighters wished each other luck in their next bouts.

Awesome you show it in your ways I show it in mine. Good luck in your next bout

Awesome you too. maybe redirect some of this energy into training and maybe we will see you in the UFC soon.I’m just speaking for all of the women who actually try to sell the sport. I’m also speaking for women in general.

Taekwondo specialist Loureda has been out of action since last June, when she defeated Larkyn Dasch at Bellator 222.

She took an 11-week hiatus from training last year to appear on reality TV show ‘Exatlon Estados Unidos’, which is broadcast on American Spanish language network Telemundo and features athletes, celebrities and everyday people competing in a series of challenges.

The budding flyweight star was due to make a comeback at Bellator 238 in January, but was forced to withdraw due to injury.

Also on rt.com ‘The most natural body a woman can have’: Bellator babe Loureda laughs off ‘implants’ comment (PHOTOS)

UFC fighter Chiasson is not the only one to take note of Loureda’s most recent dance clip – UFC two-weight women’s champ Amanda Nunes shared a humorous clip of herself imitating the dance, although that drew a somewhat friendlier exchange with Loureda.